You have lived on a conveyor belt most of your life. It’s time to jump off and be more productive.

The success behind mass production factory lines is they offer consistency. Sameness. A standardised product.

The raw materials are shaped and moulded as per a preconceived design. They are then sent along a conveyor belt and pieced together. By the end of the line you have your product. Fully assembled. And looking the same as every other product on the line.

Industry at its efficient best.

Now imagine the same scenario, but this time change the factory setting to a classroom. The conveyor belt is your compulsory education. And the different parts added along the production line are your subjects and predefined curriculum.

Everybody gets the same. Expectations are that we all learn exactly the same and need the same content in order to be fully functioning human beings.

We all sit the same exams. Because we all need to be standardised.

And any deviation from the expected norm is seen as a defect and steps are taken to fix it back into the standardised shape.

Square pegs are sanded down to fit into round holes.

Told what to think. How to think. When to think. And even what to do with these thoughts and what the expected outcome should be. Which is why you’re not as productive as you could be.

Education Dumbs You Down

There’s an interesting study by NASA which boldly suggests that “We are born creative geniuses and the education system dumbs us down”.

In this study 98% of children tested, between 4 and 5 years old, fell in the genius category of imagination.

And the adults tested?

The researchers revisited their subjects every five years and found that at age 10, only 30% remained in the genius category of imagination.

When tested again at age 15, the figure had dropped even further to 12%.

The longer you receive a conventional education the less likely you are to hold on to the creative problem solving and free thinking skills you had as a child.

Why Haven’t You Done It Yet?

Ask yourself this: “If someone tells me to do something, am I more likely to do it?”

Do you do things independently because you know there’s a value in being proactive?

Or are you more likely to put things off? Usually to the last minute? Until someone comes along and tells you it needs to get done? Urgently!

Sounds like the student approach to homework and revision to me!

Compliance At What Cost?

As much as educational establishments would like to think that they are equipping students with the knowledge and skills they need for the future, they are sadly doing the opposite.

Self-motivated, Resilient, Independent Thinkers with a propensity for creative problem-solving. They are in steady decline from the age of 4 – school age. 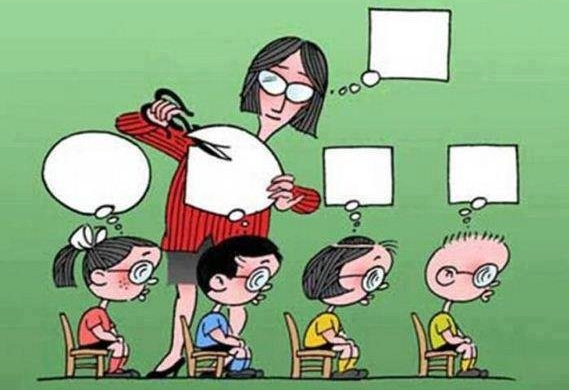 Instead we find a preconditioned majority.

And as soon as they are no longer told what to do, they find themselves at a loose end. They can’t cope. Without approval and an imposed direction they lack the skills, confidence and motivation to self-start.

Because that’s what everyone else is doing. It’s easier than having to figure things out for yourself. And it gets people off your back.

Recognising that we are all products straight off a factory assembly line, with an inherent fear of failure, is important if we are to rewire our thinking.

“You must do this if you are to be successful in your exams! You want to get good results right? If you don’t do this in exactly the way you’ve been told, you will fail!”

We need to stop fearing failure and start embracing it. Start by trying some of these creative exercises.

Don’t wait for someone to tell you to do something. Recognise the value in being proactive.

Do it for yourself.

Certainly not just because there’s an exam at the end!

There are few standardised tests once you leave education.

The most successful people don’t conform. And they certainly don’t wait around for someone to tell them to do something about it.

Five Steps Towards A More Productive And Creative You

These are easier said than done. But they are fundamental to breaking free from the assembly line mentality of passive acceptance and conformity.

Throw yourself into everything you do with the same reckless abandon as a five year old.

Who cares what anyone thinks? Who cares whether you succeed or fail? Get out of your own way.

Free yourself of conventional thinking. Jump off that conveyor belt and be more productive. Not a product.

What are you waiting for?